The first instalment of our new series on Growing Food explores the prized Virupakshi banana, exclusive to the Palani Hills

The scientific name for banana is musa sapientum which means “fruit of the wise men.” Whether it is the grower of the banana or the consumer who is wise is not clear, but seeing as I have been growing and eating lots of bananas, it really doesn’t matter, does it?

In addition to cultivating bananas—Virupakshi in the hills, and Karpuravalli in the plains—I also grow coffee, pepper, avocados, paddy, jowar, coconuts and amla, using only natural farming techniques. Our family has been in agriculture and its allied activities for several generations now, and raising multiple crops, both in the hills and the plains, is a tradition that continues to this day. I also raise cattle for dung and run a small nursery. Of all these activities, growing Virupakshi hill bananas is the most challenging, and the most rewarding.

The Virupakshi is native to the Palani Hills of the Western Ghats, where it grows naturally, under rain-fed conditions. It is exclusive to these hills, and has a geographical indication registration (also called a GI tag), awarded by the government that defines the origin of a food, and signifies the product as an intellectual property of that region. Champagne is an example of a product with a GI tag, as is tea from Darjeeling.

Virupakshi bananas are yellowish-green when ripe, have a good flavour, and though the pulp is dry, it does not drop off from the pedicels easily. The fruits are used in the Subramaniam temple in Palani to make panchamirtham—a mix of ripe banana, dates, jaggery, honey, and ghee—that keeps from spoiling because of the dry nature of the pulp of this banana. When Sirumalai bananas are used for this purpose, the panchamirtham spoils easily because of the juicy nature of the pulp.

The Virupakshi hill banana gets its name from the town of Virupakshi, located near Palani, where farmers would take their bananas on pack-ponies, to the weekly market. From there, middlemen took the fruits elsewhere, and the banana reached its final consumers. With time, roads became motorable, auction centres opened up in the hills, and farmers did not need to travel to Virupakshi to sell their produce. The name however, stayed on.

Virupakshi hill bananas are usually grown as shade for young coffee plants and planting takes place in mid-April, with the onset of the summer showers.

‘Suckers’ are severed from the clump and transplanted in two-feet cube pits filled with farmyard manure. The space between rows is kept to 12 feet, and the distance between plants 8 feet along the contour, thus getting 450 plants to an acre.

Inflorescence takes place the following summer, and the bunch is harvested 18 months from the time of planting. After harvesting, the mother plant is removed and two side suckers (daughters) are allowed to grow. This process of permitting suckers to grow is known as ratooning.

The remaining suckers are removed and planted elsewhere. Once the daughters bear fruit, four suckers are permitted to grow as a clump or mat, forming a ‘perennial plantation’, which is unique to the hills. In the plains, where crop rotation is the norm, bananas are grown as an annual crop, followed by a crop of paddy or sugar cane.

Keeping the fields free of weeds is an important operation. Dry leaves are to be cleared periodically and dry bark is removed to keep the stem clean, which prevents pseudo stem weevils.

Though minor pests and diseases, along with wild animals, have been hindering the cultivation of the Virupakshi hill banana, the biggest threat has been banana bunchy top virus (BBTV). This virus first appeared in the mid-1970s and destroyed plantations across the Palani Hills. BBTV spread fast, and the Virupakshi banana was soon on the critically endangered plant species list, almost on the verge of becoming extinct.

Farmers were keen on the revival and preservation of the Virupakshi hill banana for future generations and formed an association called the Tamil Nadu Hill Banana Growers’ Federation. This federation got the support of farm scientists and the government. Initially, affected mats were destroyed with kerosene, given free of cost by the government, to prevent the spread of the virus. Scientists from the Tamil Nadu Agricultural University and the ICAR-National Research Centre for Banana helped in identifying and controlling the vector of the virus.

Mass multiplication and distribution of disease-free planting material have been undertaken over the years. It is evident that this partnership between farmers, scientists and the government has been a success, as the Virupakshi hill banana is now being grown in more than 10,000 acres in the valleys and hills of the Palani range.

On average, a farmer gets Rs 5 per fruit of Virupakshi, and each bunch bears 70 to 100 fruits. Most commercial bananas, in comparison, fetch between Rs 1 and 3 at the mandi. Considering this, the Virupakshi hill banana plays an important role in the economic well-being of the people living in these remote, rural and hilly areas of our country. Realising the importance of this crop and the efforts of the Tamil Nadu Hill Banana Growers’ Federation in preserving this plant for future generations, the union government awarded the federation the prestigious Plant Genome Saviour Award, with a citation and a cash prize of Rs 10,00,000.

In 1962, the Udyan Pandit Award for the best banana grower in the country was given to my father, Shri WPAR Nagarajan. A rare honour indeed for a hard-working and disciplined planter who, along with his father, brought vast areas of malaria-infested land under cultivation without any basic facilities. As for farmers like me, we are glad that our grandchildren can see and eat this fragrant, delicious hill banana. 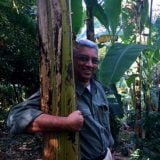 Shaker Nagarajan is a long-standing planter in the Palani Hills and is currently the president of the Tamil Nadu Hill Banana Growers Federation. He lives in Pattiveeranpatti.

Revolutionary Road: From Kodai to Kuthriyar