One of my most precious inheritances is a small collection of old cookbooks: a first-edition of Good French Cooking by Mapie de Toulouse-Lautrec, The Good Housekeeping Cookbook and a tattered copy of The High Clerc Cookery Book. The last is a compilation of recipes published by what was then the High Clerc School for Missionaries’ Children, Kodaikanal in 1924, when Kodaikanal was inhabited by a diverse community of missionaries, locals and others (Indians and Europeans) who moved up from the plains during the hot summer months. The East India Company was flourishing and had established its southern headquarters in Madras. Kodaikanal was a microcosm of the world, with people from all over, some fleeing the aftermath of the First World War, some in exile. The missionaries mostly lived in three settlements—American, Swedish and German—and social life revolved round the clubs, High Clerc School (now Kodaikanal International School)and the Kodaikanal Missionary Union (KMU), which served as a reading room as well as a gathering place.

‘One of the diversions of the ladies at Kodaikanal used to be the exchange of “delicious recipes”. For this reason, the present book was suggested as a help to all who enjoy the results of these good recipes and to save the busy housekeepers the task of writing many copies,’ says Helen Chandler Cannaday in the preface to the third edition of The High Clerc Cookery Book, published in 1924. This third edition cost Rs 2, an ‘increased’ price from the previous ones, explained as additional expenses for the new cover. The recipes use old Indian measurements—tolas, olongs, chittacks and seer—along with quarts and pounds, though this may have changed in later editions. Old cookbooks have a charm that comes from the other-worldliness of bygone days. They feature recipes for nourishment, basic cooking methods and practical tips, such as how to clean silver or kill white ants—all essential for everyday life. The recipes require little equipment other than a mixing bowl and a whisk.

The High Clerc Cookery Book is an account of the early residents of our little town in the hills. A vein of frugality runs through the book, for wartime deprivation and food shortages were still recent memories. Many had seen days when supplies were scarce and one had to be resourceful to put food on the table.

The index showcases the diversity of the town’s inhabitants and visitors: Canada war cake, Lady Baltimore cake, Scotch broth, Swedish sandbakelser, Spanish stew, Turkish dolmas, Greek stew, Yorkshire pudding, Serbian chicken soup, Russian kisel, Italian zuppa di lattuga (lettuce soup) and more. Barbara Block, who was a student at The Kodaikanal School (as it was called in the ’60s) and now works on the school’s archives, says, ‘The ladies who contributed to these early editions were a combination of people who lived here and summer visitors who came up from the plains.’ They met at the Kodaikanal Missionary Union, which moved from its previous location at Rock Cottage to the High Clerc compound in 1920. The early editions contained mainly Western recipes. This changed in the latter editions, with more Indians moving up to the hills.

The book has recipes for a range of cheesy dishes: the American classic mac and cheese, baked fondue and a variety of cheese puddings that use bread and crumbs as fillers. There are 20 egg recipes, from omelettes to eggs coddled in cream or nesting in tomato cups. My favourite is ‘Miss Stringfellow’s eggs stewed in gravy’, which I have attempted with leftover roast chicken gravy and a spicy curry, both equally good.

While most recipes feature wholesome everyday food, finer recipes like the mousseline of fish, scalloped prawns, salmon croquettes and elegant Venetian teacakes are scattered through the book along with a few Indian recipes: Mrs SK Roy’s sandesh, a recipe for chapati from Mrs Simlai and local favourites like sambar and chutneys.

The recipe for meat bobbity has a strange mix of ingredients: chopped meat with curry powder, nuts, coconut and eggs. A Google search brought me to a South African dish called bobotie, which uses the same ingredients. However, the mock oyster soup made with only onions, milk and butter remains a mystery.

Some recipes are imaginative and have amusing names; there are teasers like ‘matrimony meringue’ from the High Clerc kitchens, which features two halves of meringue sandwiched with a creamy filling—perhaps symbolic of marriage? There is a dreamy recipe for ‘sea foam’, made from a mass of sugar and egg whites whipped up to create the foam, and one for the glamorous gateau de marrons that is just good old chikki, or nut brittle.

Under the Miscellaneous section, there are ingenious tips: a carrot poultice for relieving pain and an easy way to prevent cheese from moulding by coating it with butter. When I first received the book, one of the pages had come loose and got misplaced. It contained the answer to Mrs Spangler’s mysterious ‘secret worth knowing’, and I spent several sleepless nights puzzling over this before I found the missing page and glued it back. The ‘secret’ was a recipe for cleaning silver that involved two tablespoons of Gold Dust’. Perhaps a recipe for penury too, I thought at the time. I later discovered that Gold Dust was an American brand of cleaning powder.

Mrs Cannaday had an announcement: corn meal could be ordered from the Army and Navy Stores in Calcutta and good quality bread flour from the Bombay Flour and Oil Mill Co. She offered sensible advice about ordering dry yeast imported directly from Canada. ‘The Royal Yeast Cakes are sent out monthly and cost 50 cents. The charge of 40 cents is enough to cover 3 packets, and, if you can arrange with two of your friends, who are also using Royal Yeast cakes, to have a supply for the three of you forwarded together for distribution, these packets will be supplied at the former price of 25 cents each.’

Ingredients like tinned salmon, tuna, oysters and meats, oatmeal, olive oil, Lyle’s golden syrup, Graham flour and cheese were regularly shipped over, but as shipping schedules were unreliable, careful rationing of these precious ingredients was necessary. This reminds me of Indian immigrants who carry spices, pickles and other essentials necessary to recreate ‘home’ in their new kitchens.

Like all old books, The High Clerc Cookery Book is both dated and timeless, with a cast of characters that make you curious. The ladies of the book rarely used their first names and are known only as their husbands’ spouses. Who was Mrs Cannaday, who dispensed sensible advice and was obviously a community leader? Mrs Finefrock and Miss Maiden shared exotic recipes, so they may have been well travelled. Were the two Scudder ladies who contributed recipes related to the famed Dr Ida Scudder who founded the Christian Medical College in Vellore?

Community cookbooks from the past are reminders of previous generations who lived, exchanged recipes and shared meals together, a part of Kodaikanal’s heritage. Ms Block says, ‘A new edition of The High Clerc Cookery Book was initiated by Margaret Sekhran some years back, but, after her demise, I do not know how far that went.’ It is hoped that this new edition will be revived through a broader community effort, for though the town and its residents have multiplied and spread out to distant villages and hamlets, Kodai still retains the distinct multicultural character it had in the past.

The High Clerc Cookery Book is out of print today. There is one used copy available for purchase on Amazon, and the KMU Library in Kodaikanal has a copy, accessible to members. 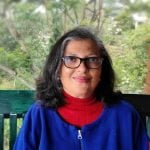 Lathika George is a writer, landscape designer and organic gardener. She is the author of Mother Earth, Sister Seed and The Suriani Kitchen, and has written for Mint Lounge, Conde Nast Traveller, Architectural Digest and Food 52. She had gardening columns in the Business Standard and The Hindu. She lives in Pachamarathodai.